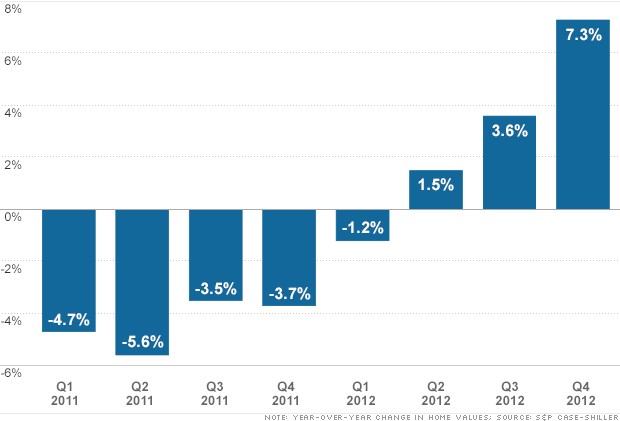 The housing market recovery picked up steam in the final three months of last year, with prices rising at an annual rate of 7.3%, according to S&P Case-Shiller, while a government report showed sales of new homes also shot up higher.

The number of new homes sold in January jumped more than 15% from December and nearly 30% from a year earlier, according to the Census Bureau report. There is only a 4.1-month supply of new homes available for sale on the market, the tightest supply by that measure since the bubble days of 2005.

The improvement in the market is driven by many factors, including near record-low mortgage rates, a drop in the number of home foreclosures, the tight supply of both new and previously owned homes available for sale, and an improvement in the overall economy, including a lower unemployment rate. These factors are combining to bring potential buyers who have been scared to buy during the housing downturn back into the market.

The resulting rise in home prices was the biggest annual increase since the second quarter of 2006, near the height of the housing boom. The sales of new homes were at the highest level since July 2008, about two months before the bursting of the housing bubble slammed the brakes on home sales.

But housing may not be able to continue to grow at this rate.

“These movements, combined with other housing data, suggest that while housing is on the upswing, some of the strongest numbers may have already been seen,” said David M. Blitzer, chairman of the index committee at S&P Dow Jones Indices.

Still, Cooper Howes, U.S, economist for Barclays, said that even if growth slows, there’s no sign of a new housing bubble.

“We don’t think we’re at the point where we have to talk about overheating,” he said. “The numbers are strong, but that’s just coming off a really low base.”

Related: Housing – how to play the rebound

The rise in home prices can provide a lift for the economy as it increases household wealth and allows homeowners who had previously owed more than their homes were worth to refinance their mortgages, putting more money in their pockets.

The increase was broad-based, with 19 of the 20 markets showing gains in December. New York posted the only decline, with prices edging down 0.5% from a year earlier.

Some of the markets with the biggest rise were those hurt the worst by the bursting of the housing bubble in six years ago — prices jumped 23% Phoenix, 14.4% in San Francisco, nearly 13% in Las Vegas and just over 10% in Miami and Los Angeles. Detroit enjoyed a 13.6% rebound in prices.

Richard Green of the USC Lusk Center for Real Estate, said the recovery in housing prices hasn’t been even across all the different price segments. He said the upper end of the market has done well as the wealthier families’ earnings have recovered  and foreign buyers have come into the market. The lower end of the market has recovered due to purchases by investors looking for bargains.

“It’s the middle market that needs help — particularly in the form of higher income — if it is going to have a sustained recovery,” Green said.