2 Million Homeowners Freed From Negative Equity in 2012; 1 Million More to Come in 2013

The falling negative equity rate is good news for struggling homeowners and is largely attributable to a 5.9 percent bump in home values nationwide last year to a median Zillow Home Value Index of $157,400 (when home values rise, negative equity falls). At the end of 2011, 31.1 percent of homeowners with a mortgage were underwater, or more than 15.7 million people.

Still, despite more than 1.9 million homeowners nationwide finding their way back above water last year, 13.8 million American homeowners are still struggling with negative equity. Many remain so far underwater that even the very high rates of appreciation experienced in many markets still can only bring them so far. In the Phoenix metro, for example, despite more than 135,000 freed homeowners last year, more than 300,000 homeowners — or 40.4 percent of homeowners with a mortgage — remain trapped in negative equity. This is largely attributable to the fact that although home values in Phoenix rose 22.5 percent last year, they remain more than 44 percent below their peak. So for those who bought at the peak, even with rapid appreciation, they still have a long way to go.

The graph below shows the loan-to-value (LTV) distribution for homeowners with a mortgage nationwide in 2012 Q4 vs. 2011 Q4. You can see that even though many homeowners are still underwater and haven’t crossed the bold 100 percent LTV line into positive equity, they are moving in the right direction. The 2012 Q4 buckets on the 100 percent+ LTV side (the red bars) are getting smaller compared to 2011 Q4, and the black bars are getting larger. 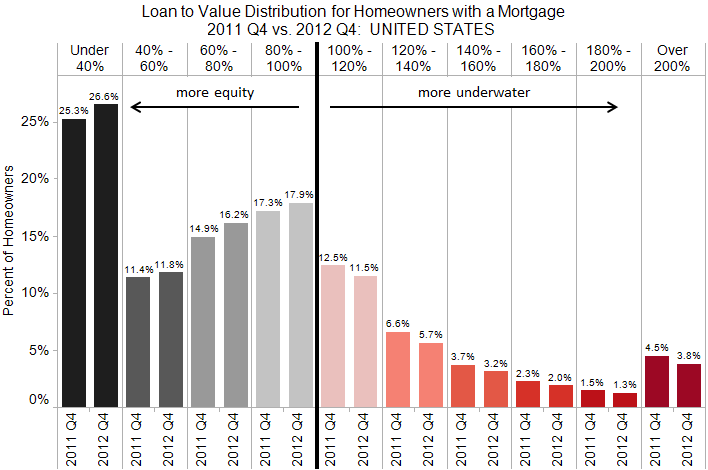 U.S. homeowners with a mortgage are slowly gaining equity back in their homes.

Zillow forecasts negative equity by applying anticipated appreciation or depreciation rates to a home, according to the most current metro and national Zillow Home Value Forecasts, and by assuming all other factors remain constant.

“As home values continue to rise and more homeowners are pulled out of negative equity in 2013, the positive effects on the housing market will be numerous. Freed from negative equity, homeowners will have more flexibility, and some will likely choose to list their home for sale, helping to ease inventory constraints and moderating sometimes dramatic, demand-driven price increases in some markets,” said Zillow Chief Economist Dr. Stan Humphries. “But negative equity is still very high, and millions of homeowners have a very long way to go to get back above water, even with current robust levels of home value appreciation in most areas. As a result, negative equity will remain a major factor in the market for the foreseeable future.”

Also, new this quarter, users can zoom in on a portion of our Negative Equity visual and embed only that portion on their website. So, for example, if you were in Seattle and wanted to post the interactive tool to your site, we would be happy to show you how.