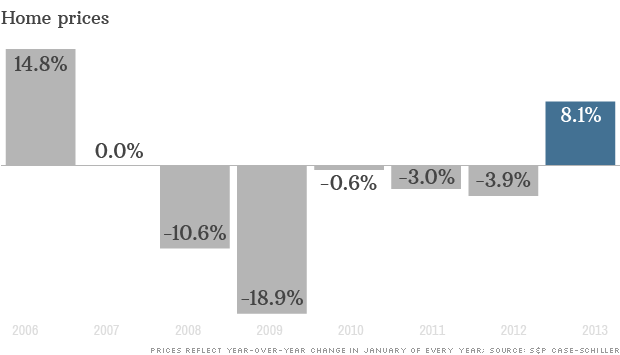 Home prices continued their recovery, rising 8.1% in January, although a separate report showed a slight slowdown in new-home sales.

The S&P Case-Shiller index, which tracks the 20 largest markets in the nation, showed the biggest year-over-year gain in prices since June 2006.

“This marks the highest increase since the housing bubble burst,” said David Blitzer, chairman of the index committee at S&P Dow Jones Indices.

In a separate government report Tuesday, new homes sold at a 411,000 annual rate in February, down nearly 5% from the January sales pace but up 12% from year-earlier levels. The typical price of a new home sold in the month was $246,800, up about 3% from both the January and a year earlier.

Joseph LaVorgna, chief U.S. economist for Deutsche Bank, said that bad weather in February could be partly responsible for the slowdown in sales. But he said market fundamentals suggest that the market for new-home sales should remain strong.

“Despite the pullback in sales in February, the uptrend in housing remains clearly intact,” he said. He is forecasting even stronger sales in the second half of this year.

The Case-Shiller report shows the recovery in home prices is widespread. All 20 markets posted a year-over-year gain, and the pace of increase picked up in every market except Detroit.

Some of the markets hurt the most by the bursting of the housing bubble have enjoyed the biggest gains, led by a 23% rise in Phoenix. Prices were also up more than 10% in San Francisco, Las Vegas, Detroit, Atlanta, Minneapolis, Los Angeles and Miami, all markets that had been hit hard by foreclosures.

New York posted the smallest rise, up only 0.7%.

But experts say they see a lot of strength in the current market.

“The market still has a long way to go nationally, but the healing process — and a return to a normalized housing market — is definitely well underway,” said Jim Baird, chief investment officer for Plante Moran Financial Advisors.

Home prices have been helped in recent months by a number of factors, including tight inventory of homes available for sale, near record-low mortgage rates and a drop in homes in foreclosure. A decline in unemployment is also helping the housing recovery.

The housing recovery itself is helping support overall economic growth, as builders scramble to hire workers to meet the renewed demand. The lift goes beyond the impact of increased construction on the economy, as the rise in home prices lifts household wealth.

Rising home prices also reduce the number of people owing more on their mortgages than their homes are worth. That, in turn, can help them to refinance those loans at a lower rate, freeing up money to spend on other goods and services.