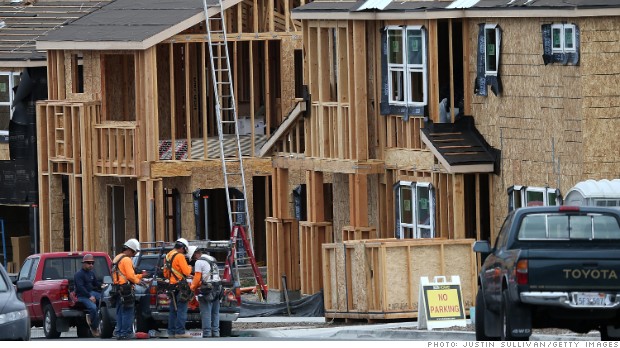 The housing market has made a big comeback over the past year; home prices have surged some 8% and homebuyers can’t seem to buy up properties fast enough.

But just as quickly as the market is gaining ground, some industry experts worry it will come crashing back to Earth. Here are three reasons the housing market recovery may not last:

1. The housing recovery is being led by investors. One problem is that investors are leading the latest surge in home prices, said Dean Baker, co-director of the Center for Economic and Policy Research. They are taking advantage of low interest rates and depressed home prices and when those rates and prices rise, they’ll likely pull back, he said.

“An investor-driven boom is likely to end badly,” said Baker. “I’m worried that some of the big jumps in prices are driven by the same sort of speculation that drove the [original] housing bubble.”

And while institutional investors and small but experienced mom-and-pop outfits have been buying many of the properties, there are a growing number of inexperienced “armchair investors” now buying into the boom — a sign that demand may be peaking, Baker said.

In some hot markets, home prices should start slowing or even reverse gains. In Phoenix, where selling prices were up 23% year-over-year in January, many investors planned to rent out the properties they bought. “Yet, there was no comparable increase in rents and the rental vacancy rate in Phoenix is very high,” said Baker

As investors realize a low rate of return on their investments, demand will soften, he said.

2. The economic recovery is just not strong enough yet. “These days, I worry more about the economy hurting housing than housing hurting the economy,” said Jared Bernstein, a senior fellow at the Center on Budget and Policy Priorities, a Washington D.C.-based think tank.

Related: Was your home a good investment?

Meanwhile, half a million Americans withdrew from the workforce during the month; either because they stopped looking for work or retired and stopped drawing unemployment. Many were discouraged workers, a sign that the economy remains weakened.

While Bernstein thinks the housing recovery will continue, he believes it will do so at a much slower pace. Once the jobs picture improves, he said strong pent-up demand for homes should emerge.

3. Government cuts will hurt homeowners. Headwinds from the current round of government spending cuts — $85 billion worth — could also curb the housing market’s recovery.

“The spending cuts from the sequestration [will] hit their apex this summer,” said Mark Zandi, the chief economist for Moody’s Analytics.

The cuts, including unpaid days off for federal workers, cuts in unemployment compensation and decreased military spending, combined with the expiration of payroll tax breaks earlier this year, will lead to job and income losses that could strip about a percentage point off the GDP this year, according to Bernstein.

And while current mortgage rates remain extremely low, about 3.5% for a 30-year, fixed-rate loan, they’re bound to go up, the industry experts said, making it a lot more costly for people to afford homes.

“I’m worried that it’s too tough for many people to make the family budget, including the mortgage payment,” said Bernstein.

3 reasons the housing recovery may not last