The housing recovery is on firm ground as buyers return to the market in droves and U.S. home values continue their more than year-long upward march. But stagnant income growth and a lack of flexible mortgage finance opportunities for home buyers are among the main concerns going forward, top economists and policymakers said recently at the Zillow-sponsored Forum on the Future of Housing.

The forum, held April 18 at the Newseum in Washington, DC, and produced by Zillow in partnership with the American Action Forum and Progressive Policy Institute, attracted more than 250 attendees to listen to a series of panel discussions and keynote addresses featuring elected officials, leading housing-related association heads and housing analysts. Among the highlights were comments from Sen. Johnny Isakson (R-GA) and Sen. Jeff Merkley (D-OR), who each spotlighted the need for mortgage reform that is safe, sustainable and fair to borrowers and private lenders alike.

“We didn’t have a down payment recession, we had an underwriting recession,”  Isakson, a former real estate agent for more than 30 years, said during his conference-opening address. Underwriting standards supported by government-sponsored entities (GSEs) Fannie Mae and Freddie Mac prior to the housing recession helped inflate the housing bubble by sacrificing loan safety for profit, Isakson said. He has proposed phasing out the federal backstop role in the secondary mortgage market over 10 years, leaving a single, private company that’s created to eventually replace Fannie and Freddie.

“We should never again let the humble, amortizing, fixed-rate mortgage become a predatory instrument,” Merkley said. “We can’t afford to get GSE reform wrong. We can’t afford to return to the former Fannie and Freddie model of private gain, public pain.” 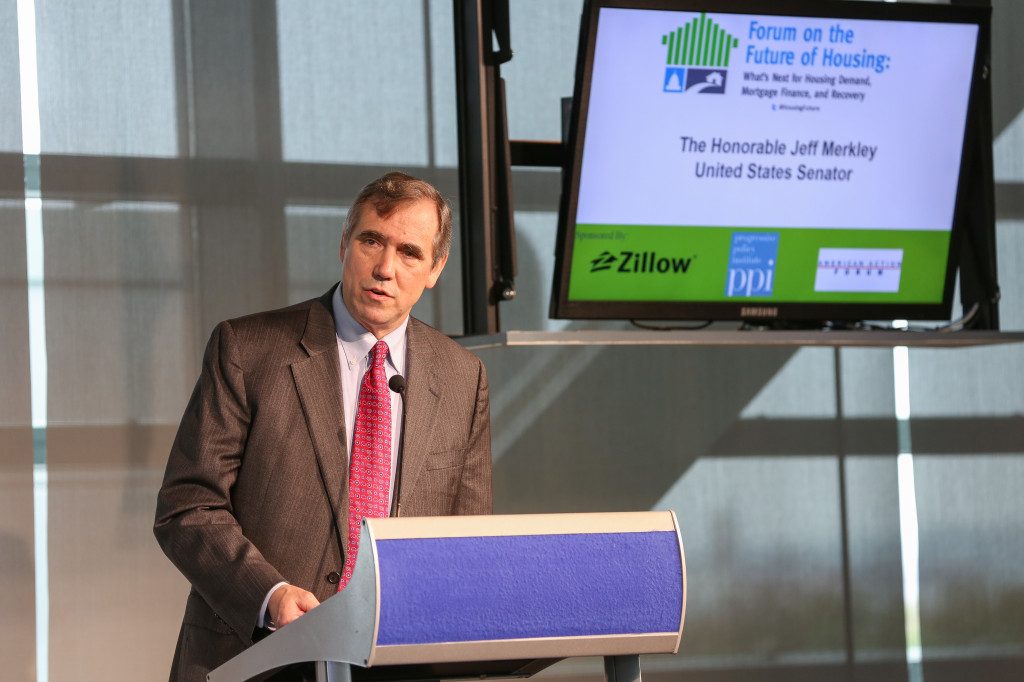 The panel agreed that rising home prices are a boon to current homeowners but could present an obstacle for future buyers as income growth stagnates while prices keep escalating. Much of the discussion also focused on the current role of large and small investors in the housing market and how much of an impact they will have going forward.

“Dismiss the idea that this is an investor-driven recovery,” Realogy’s Smith said. “It’s not.”

Howard of the NAHB cited rising household formation rates as an indicator of solid future demand for housing, particularly at the first-time home buyer level. But he also said builders are having difficulty creating supply to meet this nascent demand, as lending standards for land acquisition and development for builders remain incredibly tight.

Other panelists pointed to growing demographic diversity, increasing urbanization and the enormous size of the so-called “echo boom” generation as future drivers of housing demand. 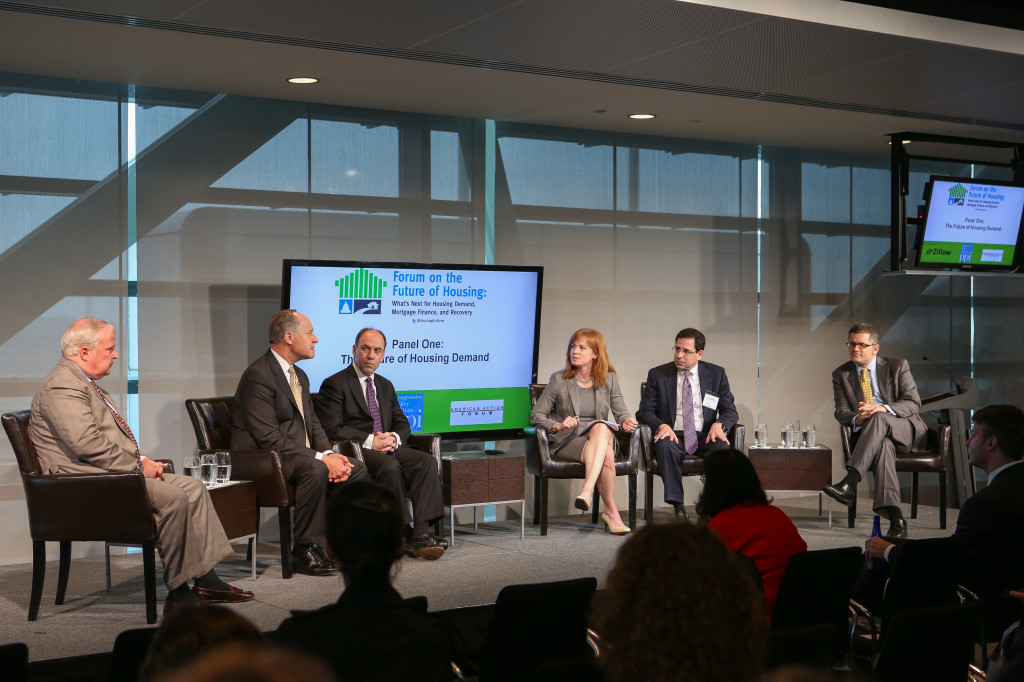 Panel on The Future of Housing Demand moderated by CNBC’s Diana Olick.

The capacity of lenders to actually make loans was a major topic. PIMCO’s Simon said loan capacity was down 45 percent, largely because several of the largest lenders in the country, including Citibank and Bank of America, have essentially stopped writing mortgages. Fratantoni of the MBA said much of the reluctance to write loans can be attributed to the very low margin for error among lenders facing harsh and costly penalties for regulatory non-compliance.

Mayer said the mortgage industry could benefit from improving technology, as other industries have, but has so far been slow to adopt new, digital evaluation, underwriting and management processes. He also advocated for portable mortgages, which could be carried throughout a homeowner’s lifetime as they move from home to home.

All panelists said they were concerned that rising mortgage interest rates may disrupt the mortgage market in coming years, making mobility more difficult and dampening demand for adjustable-rate mortgage products that are likely to become more expensive over time, not less. 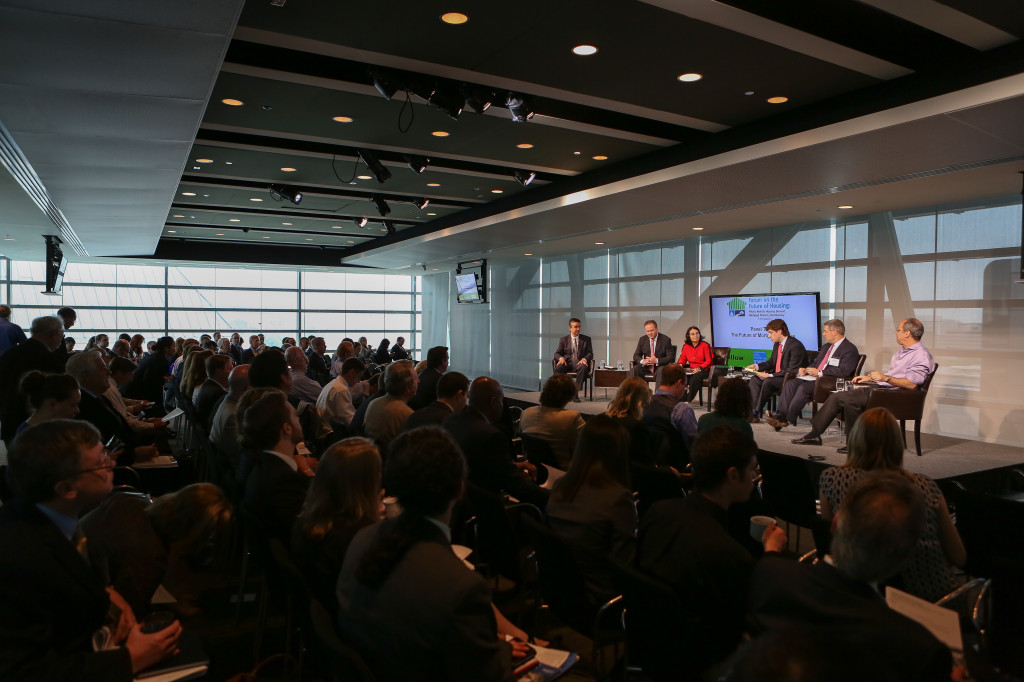 Thanks to everyone who attended our Forum on the Future of Housing. Please check back here next week, when we will have an on-demand video of the forum available. For Zillow Chief Economist Stan Humphries’ full PowerPoint presentation highlighting the national housing market please click here.

“Rick worked diligently to help us find our Connecticut home. We were not from the area. We relocated from NJ. This meant we had no direction. He patiently ran all over the state with us until he got to know us. He quickly got to know us and offered invaluable insight with his knowledge of us  and what he knew we were looking for. When we found a home that we loved, he literally had all negotiations and inspections completed within a week. We were closed and relocated in 4 weeks. At the same time, we were working with another realtor in NJ on our sale. Though our NJ realtor was good, Rick was SUPER! The difference in the experiences was vast. I would recommend Rick and Santa Realty to anyone who wants to work with a Realtor who is truly concerned about YOU, not a sale!”- Dan and Jerri W., Avon, CT - 03/06/2019
“There isn’t enough space to truly express my appreciation for Rick’s support. Rick took all of the bantering in stride and was able to remain professional but also personal. Rick truly earned my respect throughout the journey and I hope to keep in touch with such an outstanding person. His  dedication and commitment to serving his clients are 2nd to none. Thanks Santa Reality for turning our house hunt into home sweet home!!!”- Jeremy S., Windsor Locks, CT - 02/25/2019
"Rick is amazing and easy to work with. He treats you like a friend and helps guide you in the right direction. He helped us through our very first home buying experience."– Kelsey E., Tariffville, CT – 12/18/2018
"Looking for a new home? Rick Santasiere searches non-stop to find your perfect home. Need to sell the residence you’re in first? Rick Santasiere is persistent in finding a buyer and a closing ASAP! But wait…there’s more: Do you need to sell your residence and your in-law’s residence and find that perfect home with an in-law suite? No problem! Rick Santasiere accomplished this real estate trifecta in just a few weeks for our extended family. Thank you very much Rick!"-Judy B., Suffield, CT – 12/16/2018
"Rick @Santa Realty was amazing to work with - straight forward and effective. Everything we needed throughout our home purchasing process was completed on, or before, we needed it. Our loan officer (from a major national lending agency) even gave Rick a huge complement – said he was by far one of the best realtors he has ever worked with!! Rick catered to our scheduling needs, which was extremely helpful. I will absolutely recommend Rick and #SantaRealty to friends."– Ryan D., Granby, CT – 09/06/2019
"As first time home shoppers, we were clearly out of our element. Rick showed a ton of patience and understanding in guiding us through the entire home shopping/purchasing process. Throughout our experience with Rick we were impressed by his level of professionalism and knowledge of all aspects of sales and purchasing. He took personal time to walk us with kid gloves through every step and guided us through uncommon aspects of home selection. We found Rick to have our best interests at heart at all times - we felt like family. Rick truly has the customer's best interest at heart, never was our experience sale driven. We were so lucky to have found such an amazing realtor who we will refer to all as no one is better."– Art and Christine R., Bloomfield, CT – 04/22/2019